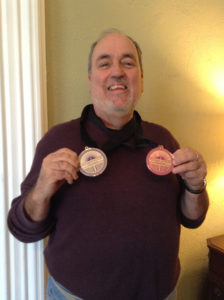 From time to time, Brother Mickey receives an award or recognition for a recent book; is invited to bring his artwork to distant places; or has a new ministry initiative. He would like to share this information with all of you who have been so supportive of his ministry through the years, so this new page of his web site is dedicated to “sharing the joy”!

World Library Publications announced that Brother Mickey’s Book Our Common Home: Visual Meditations on Pope Francis’ Encyclical Laudato Si, was recognized with a 2018 Illumination Award in the Category of Catholic. He has been awarded a Bronze Medal for this work.

Brother Mickey’s art exhibit, “LOVE WHICH MOVES THE SUN AND STARS” is opening on April 11th, at Villanova University Art Gallery. The art exhibit will remain open until August 10th. Pieces inspired by the Encyclical “LAUDATO SI” as well as a number of other Acrylics, and mixed media images are included in the exhibit..

As a graduate of Father Judge High School in Philadelphia, Brother Mickey will be inducted into the Hall of Fame in May of 2018.

Brother Mickey has received an invitation to bring his artistry to Kenya, Africa where he anticipates doing some mural painting for a few weeks during the coming summer.

One of Brother Mickey’s most endearing characteristics is his sense of humor, which is so well illustrated by this photo. We enjoyed it so much that we had to share it with all of you. The picture was taken during the Southwest Liturgy Conference in Wyoming earlier in the year.