As the nation continues to grapple with the issue of racism, an acclaimed liturgical artist and retreat leader is using his gifts to foster healing and justice.

Oblate Brother Mickey McGrath has created a series of images that take a faith-based look at the struggle for racial equality. From his studio in Camden, New Jersey, Brother McGrath has been posting his recent work on Facebook, often in the form of coloring pages that viewers can download and use as meditative art exercises.

One image in particular has received international attention: a striking portrait of Christ falling under the weight of the cross, above which the words “I can’t breathe” are painted in red.

The phrase was among the last uttered by George Floyd, who died May 25 after close to nine minutes in a Minneapolis police knee-to-neck restraint. Floyd’s killing has sparked global waves of protest, with calls for police reform and a renewed look at race relations.

Brother McGrath said the depiction was adapted from a set of Stations of the Cross he had completed two years ago in Kenya. 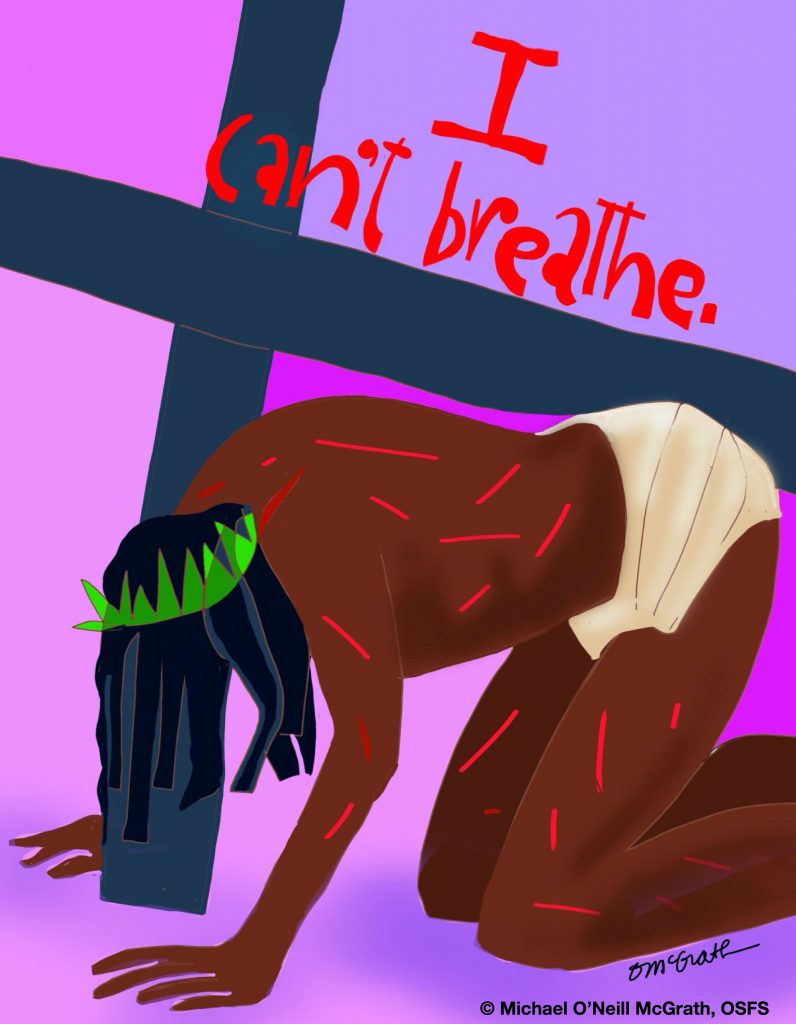 “If we could see Jesus as a black man falling under a cross, as a man who can’t breathe, maybe that will make people see him in others,” said Brother McGrath, a former professor at De Sales University.

African American spirituality has had a profound influence on his life and work, he said.

In 1993, while still teaching part time at De Sales, the Philadelphia native traveled back to the city’s Mayfair section to visit his dying father. At his parents’ house, Brother McGrath came across a magazine article on Sister Thea Bowman (1937-1990), a Catholic convert and Franciscan Sister of Perpetual Adoration now on the path to sainthood.

“I later saw a video about her life, and it changed me forever,” said Brother McGrath. “She unleashed something in me, and my artistic style shifted to something different than anything I’d ever done. She has become my guiding force.”

Shortly after discovering Bowman’s life and work, Brother McGrath became a full-time artist and received his first commission, painting the encounter between Mary and Elizabeth in Luke 1:39-56 at the request of the Visitation Sisters of Minneapolis.

The work features a joyous embrace between Mary and Elizabeth, who appear as black and dressed in vivid African-style prints. The title, “Windsock Visitation,” recalls the sisters’ tradition of hanging windsocks outside of their house on days when they offer afterschool activities for neighborhood children.

Brother McGrath said that the women have become his “dearest friends,” and like him, they live amid an impoverished but richly diverse urban community, one in which he feels quite at home.

“My studio is my monk’s cell,” he said, adding that his work is not intended as a pious diversion.

“This is my way of trying to get people to see Christ in each other,” said Brother McGrath.

Referencing a coloring page he posted on Facebook for the feast of Corpus Christi, he said that “the idea is not just to go to adoration and come home and feel good about yourself.”

“I told my students that all the time,” said Brother McGrath. “If you go back to class and don’t see Christ in the black person … then you’ve missed the point.”

He added that the city of Camden itself has made progress in healing some of the tensions between residents, most of whom are of color, and law enforcement.

Once dubbed the nation’s most dangerous city, Camden disbanded and reconfigured its police department in 2012. Although substantial challenges remain, the municipality is now considered a model for others seeking to overcome violence and racial division. An anti-racism protest earlier this month saw Camden police joining demonstrators.

“It was a peaceful rally, full of trust in the police,” said Brother McGrath. “It ended on the steps of the police building, around the corner from where I live.”

In the coming months, Brother McGrath intends to publish a book of his images, which he often designs using an iPad. He maintains a full schedule, traveling extensively across the globe to lead retreats, workshops and art-themed tours.

He said his life’s motto is a quote from Dostoevsky, who wrote that “beauty will save the world,” an assertion endorsed by Servant of God Dorothy Day, and cited by St. John Paul II in his 1999 “Letter to Artists.”

Along with love, said Brother McGrath, “beauty is our deepest human inclination.”

END_OF_DOCUMENT_TOKEN_TO_BE_REPLACED

Free Prayer Cards for All Health Care Workers and All First Responders and All the Sick and Everyone Concerned and Hoping... 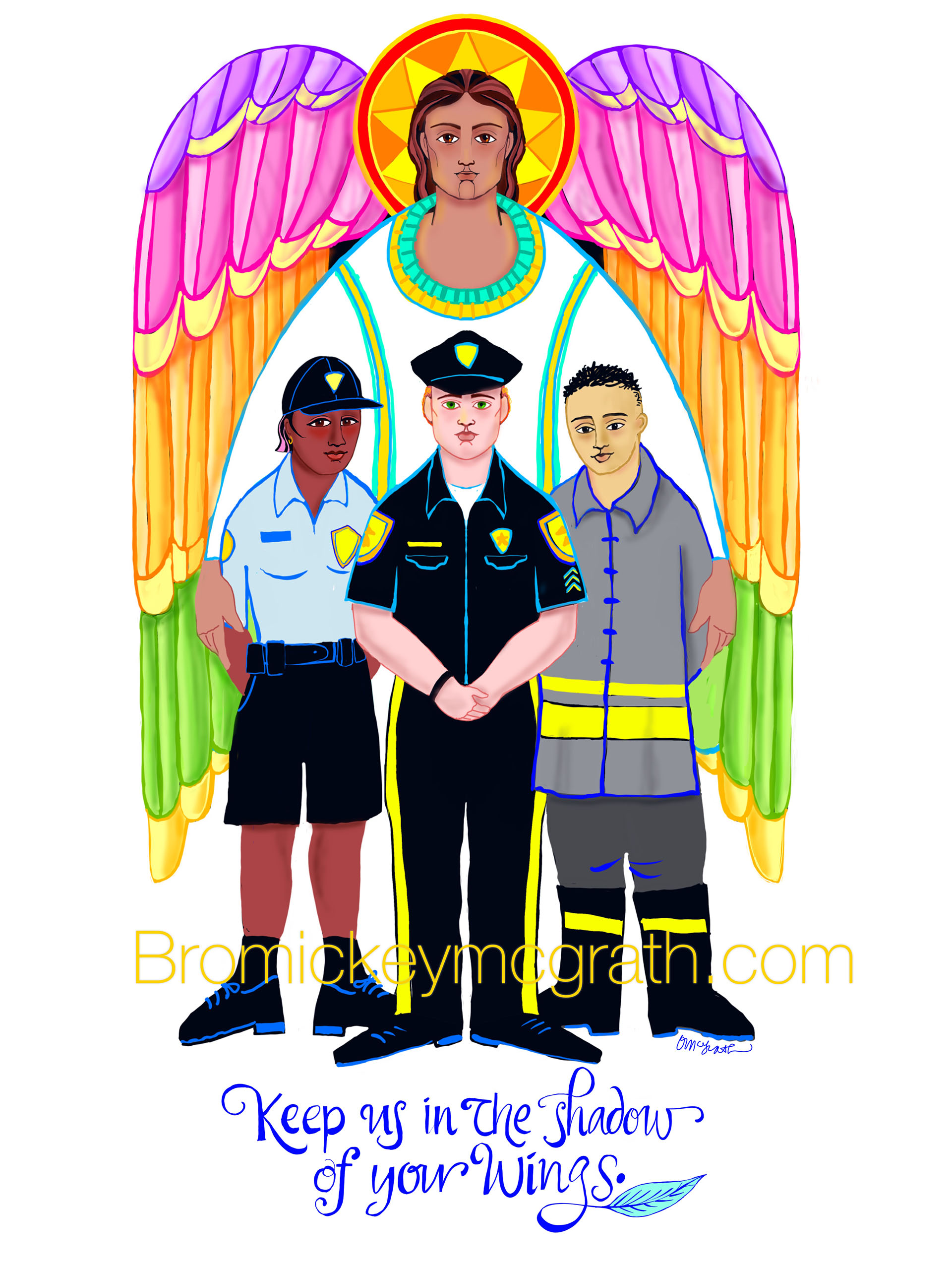 END_OF_DOCUMENT_TOKEN_TO_BE_REPLACED

St. Michael the Archangel Patron of Police and First Responders This image is partially inspired by a fond childhood memory...